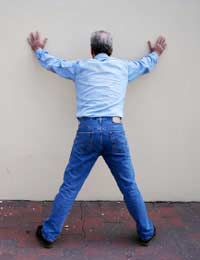 If you are ever called upon to make a citizen’s arrest, it is vital that you stay within the law. With compensation culture on the increase and criminals increasingly complaining about the violation of their human rights, the one thing you must ensure is that there is no chance that your actions, however well-intended, can have consequences which you most certainly did not intend, such as landing yourself in trouble with the law.

If there are no police officers present, and it is safe to assume this is the case, as otherwise you would not be making a citizen’s arrest, then notify the police if you can and they can come to apprehend the offender. There are plenty of cases when this might be the best course of action, such as if the offender is not likely to disappear, such as if you know where they live, or if the crime which you believe they intend to commit is not happening imminently. Even if you know that the police will not be able to make it in time to apprehend the offender themselves, it is still best, where possible, to let them know what you intend to do as they can then be on their way to the scene – and it gives you some protection if your actions are later scrutinised in court.

In a situation where you believe a crime to have been committed, you must think very carefully before you act, as emotions can often be heightened if someone is suspected of wrongdoing. However, if you have interpreted the situation incorrectly, you run the risk of apprehending an innocent person. This is why citizen’s arrests are usually used in very clear cut circumstances where there can be no mistake that a crime is being committed by the person you are detaining.

Before you attempt to arrest the offender, it is best to warn them by telling them to stop what they are doing. Then tell them what you intend to do. They may attempt to run away or struggle or even hurt you, but it is still wise to announce what you are doing. When the police arrive – and if you did not notify them before, this the point you must call them, make yourself known to them immediately, telling them what you did and why – what you saw, what you believed to be happening and how you restrained the offender.

One other key point to bear in mind when making a citizen’s arrest is that you will more than likely have to give evidence if the case comes to trial. This means confronting the offender again and possibly being questioned, so make sure you take stock of what is going on around you and pay attention to what happens so that you may better recollect it in court.