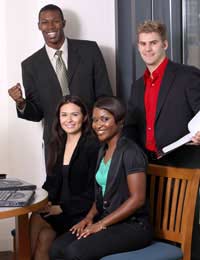 Where does one start with a topic such as racism? Well, it is an ugly and sinister thing, but there is no getting away from the sad fact that it still exists in many forms, in society today. From institutionalised racism within organisations, to the attacks on people because of their race which we read about in newspapers, racism is very much alive and kicking.

Of course, this is not without much trying to outlaw it. In most circles, racism is a deplorable act and if anyone exhibits any sign of it, then they will be an outcast. But this does not mean racism does not happen. Laws which the Government have passed may give courts the power to punish people but they can never tackle the fact that a tiny minority of people think racism is acceptable. This must be tackled from within society.

There can be no reason for outright racism. The racists themselves cannot justify it. As stated above, racism is outlawed now, and crimes such as assaults can carry harsher penalties if they are found to be committed because of a racist motive. But however much people are punished; they will never be stopped from holding their viewpoints and thinking the way they do. It must be tackled by a change in the viewpoint of that sector of society.

Institutionalised racism is much less easy to identify than outright racism. It is that kind of racism whereby people in an organisation feel that they are being discriminated against because of their race. The problem is proving it as it can often be in a subtle way.

Ways that it shows itself can include people in a company being passed over for promotion because of their race. Accusations have been levelled at the police in years gone by – with some quarters suggesting that black people are more likely to be stopped than white people. It can be even subtler than this. A look, a glance, people having a feeling – all based on the colour of someone’s skin or the race they are all adds up to institutionalised racism.

This article only brushes the surface of racism, with a look at these two facets of it. Until everyone in society makes their feelings known any time racism is shown, it will never die out completely. The fact it is mostly socially unacceptable is a start. The very fact that people would judge other people based on their race is an unpleasant thought, and racism itself even worse.

What more can be said about racism? Whole books could be written about it but at its heart it is the judging of someone based on their race – a completely ludicrous idea however someone tries to justify it.

Multicultural Society
Share Your Story, Join the Discussion or Seek Advice..
Racism is insidious, that’s the real problem. Many people who claim otherwise are racist in ways they might not even notice. The problems in the police and in football highlight just how subtly (and sometimes blatantly) racist our society can be. It’s a pity, and try as we might, change won’t happen quickly.
superintend - 20-Sep-12 @ 3:12 PM
The sad and simple fact is that it's probably impossible to totally eradicate racism. There is at least some encouragement when you look at kids in primary schools, though. One thing they don't seem to notice is the colour of anyone's skin - just watch them in the playground, they get on with it and enjoy themselves. If we can find a way to make that open attitude last then we might have a chance for the future, but it won't be in our lifetimes.
Tom - 6-Jun-12 @ 10:24 AM
Title:
(never shown)
Firstname:
(never shown)
Surname:
(never shown)
Email:
(never shown)
Nickname:
(shown)
Comment:
Validate: