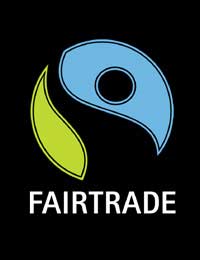 How Will I Know the Mark?

In 2008, an Omnibus survey said that 80 per cent of the population of the UK recognised the Fairtrade mark, which is remarkable by any branding standards. However, it is also likely that many of these people will simply know the look of the mark rather than its exact purpose - or what it is called. The mark is a blue, green and black circle with a black dot on the blue section - the black could be seen to be the silhouette of a stylised person. But what it actually represents is open to interpretation. A popular view is that the black at the centre of the circle is a pathway to a better future, in between the blue sky and green land. Other suggestions have included a parrot or a leaf, but whatever you interpret it as, it is certainly eye-catching. It has been in use since 2002 worldwide. It is usually accompanied by wording to denote Fairtrade but not always. This mark is copyrighted so wherever you see it, you should be assured that the product is Fairtrade.

What Must a Product Do to Use the Mark?

The mark is a registered mark internationally, and, as such, those companies which want to use it must adhere to a set of standards, published by the Fairtrade Foundation. The mark is an international one, and as such, these standards are set by the Fairtrade Labelling International Organisation. A wide range of organisations are involved and consulted when drawing up these standards, including Fairtrade bodies in different countries, academic institutions and even the producers themselves, to make sure the standards are fair and achievable.

What Stops the Mark Being Abused

Rigorous checks are in place to ensure that these standards are adhered to at all times and not abused. But if anyone thinks they have seen the mark being used by an organisation which does not have the right to do so, they can report that organisation by writing to the mark misuse officer at the Fairtrade Foundation in London who will then investigate. It is very important that the mark not be misused to protect both the integrity of the scheme and the rights of those products and producers which are genuinely Fairtrade.

As a consumer, it is very important that you trust the Fairtrade mark and all it stands for to give those developing world producers who are members of the scheme a fair chance. As such, the mark's use is carefully regulated so you will never see it splashed all over hoardings or used gratuitously. The advantage for the consumer in this is that when you see the mark, you can be as sure as possible that it is being used in a legitimate way and that you are supporting developing countries by buying it.