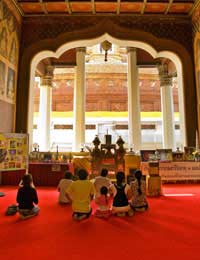 Ethics and morals in religion is a contentious subject and one which may offend people. Therefore, this article will not aim to discuss anything about the issues which could do this in any way shape or form. Instead, this article will simply lay out the ways in which ethics and morals could possibly come into play and leave it to the reader to make up their own minds about the rights and wrongs of the situation.

Almost all religions have issues or commands which could cause ethical and moral dilemmas for people – usually if they have to make a decision between their religion and the needs of people around them.

For the purposes of this article, we will concentrate on things which pose ethical and moral dilemmas largely in the UK. Although there are these dilemmas the world over, because different cultures have different moral codes, it is impossible to generalise. It is also hard because all people have slightly different moral codes and therefore, I do not suggest that the issues below cause a dilemma for all people – just that they have the potential to.

In the UK, abortion is legal. However, some religions ban it. This is a problem morally for several reasons. But the primary one is that if someone came to you for help because they needed an abortion but your religion banned it, what would you do. There are many reasons people may need or want an abortion and some of them are completely unavoidable. In these cases the person who has been approached for help is faced with a huge moral dilemma.

Contraception, like abortion, is banned in some religions. This poses an even wider ethical and moral dilemma to people of these religions than abortion. For if contraception is not used, not only can people fall pregnant but potentially life threatening viruses and illnesses can be spread.

Although for people who want to stay well within their religion, this should not be a problem because they simply abstain from sex before marriage as these religions stipulate, that does not solve the pregnancy issue. But also, these people may still be asked for help or money or views about contraception elsewhere in the world.

For example, in Africa, HIV has spread quickly over recent years and many charities fund contraception and awareness there. But for people whose religions ban it, they can find themselves in an ethical dilemma should they be asked to support these charities.

This is one of the most contentious issues there are to do with religion and ethics. There are religions in existence which ban blood transfusions because they say they are banned in the Bible. But clearly, blood transfusions are a lifesaving procedure – and can be not only for an adult but also for a child or an unborn child.

Doctors can intervene with children but should really respect adults’ wishes with regards to transfusions. This means that it is not only the patient who is in a moral dilemma, but also their families and the doctor – who is torn between their duty to save lives and the wishes of the patient.

These are not the only areas which are problematic in ethics and morals. As is stated above, pronouncing anything definite on these topics is not for the onlooker. Each dilemma must be approached on its own merits by the people involved. This article is rather here to serve the purpose of highlighting some potentially problematic areas and allowing the reader to decide for themselves.