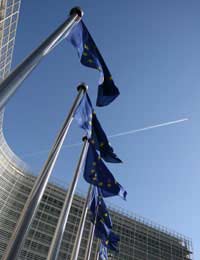 All of the bodies and institutions link into each other in some way, and the Parliament is the body which makes the legislation - however, just as in a national Government, it can often be the non-elected representatives who are actually the experts on a subject.

Although the European Commission cannot create legislation, some people do believe it is the most important body within the European Union. It is roughly the equivalent of our civil service - the people who work there are paid a wage to do it and are experts in their field. They are also non political figures for the most part.

At present, there are 27 commissioners who lead the Commission, one from each member state. One of these is the president and the other 26 all accept a special area of expertise. Although these commissioners can, and often are, former senior politicians, it is not their job to advance politics or their member state - rather, the interests of the EU as a whole.

The European Central Bank, or the ECB as it is more commonly known, has been of vast importance since the euro was introduced. It is responsible for the euro across the whole of the eurozone and must make sure prices stay stable in all of the countries that use it.

It is also the primary organisation responsible for holding the euro's value. It has not completely taken the place of the national banks in the countries that do use the euro, in fact it actually works together with them. But the ECB itself is completely independent and must work in the interests of all the eurozone members.

The Council of Ministers

Like many organisations which are political in their make up, the council of ministers does not actually make decisions - rather, it rubber stamps them. That is to say, the 'civil servants' make a decision based on their expertise and the council of ministers then agree to put it into practice. But as the elected members of the member states, they have a vital role to play in making sure these decisions are in the best interests of both Europe and the member states themselves.

The European Union is a creature with many different organisations, bodies and institutions. In addition to these mentioned above, there are numerous agencies, similar to quangos which carry out similar types of work of those in the individual countries. As such a massive organisation it is no surprise that all these bodies are needed. But for the average person on the street who will never come into direct contact with them, the multitude of organisations can be very hard to comprehend indeed.